Production is flowing very nicely albeit slowly but as I said we’re moving closer to upping production by a significant amount- it’s just finding the time to do it!

This has been the cause of some frustration for me for the past many months. We did decrystallize our carbon sixty product by ‘accident’ and have been trying to replicate it ever since.

We’re so close it’s ridiculous! I expected this color issue to be problematic but so far only three customers have complained they are not getting the color like they used to and none have demanded a refund- except one! But there’s always one!

Even though there is no difference in potency red or gold, it is a personal issue for me to have our C60 red when it is dissolved in oil.

But I now know what is happening. Vacuum times have improved, we’re using a higher and finer grade of graphite made in USA. We understand the amount of plasma needed- everything is being perfected- everything to the last detail.

So all these improvements mean the quality has improved and guess what- it shows as even less color! Argh!

What’s happening? The C60 molecule we’re manufacturing is even more perfect as a result of many improvements. Therefore it will form more crystal structures and allow more light through as a result.

Anyway we’ll keep working on it.

The vial on the right is slightly decrystallized. 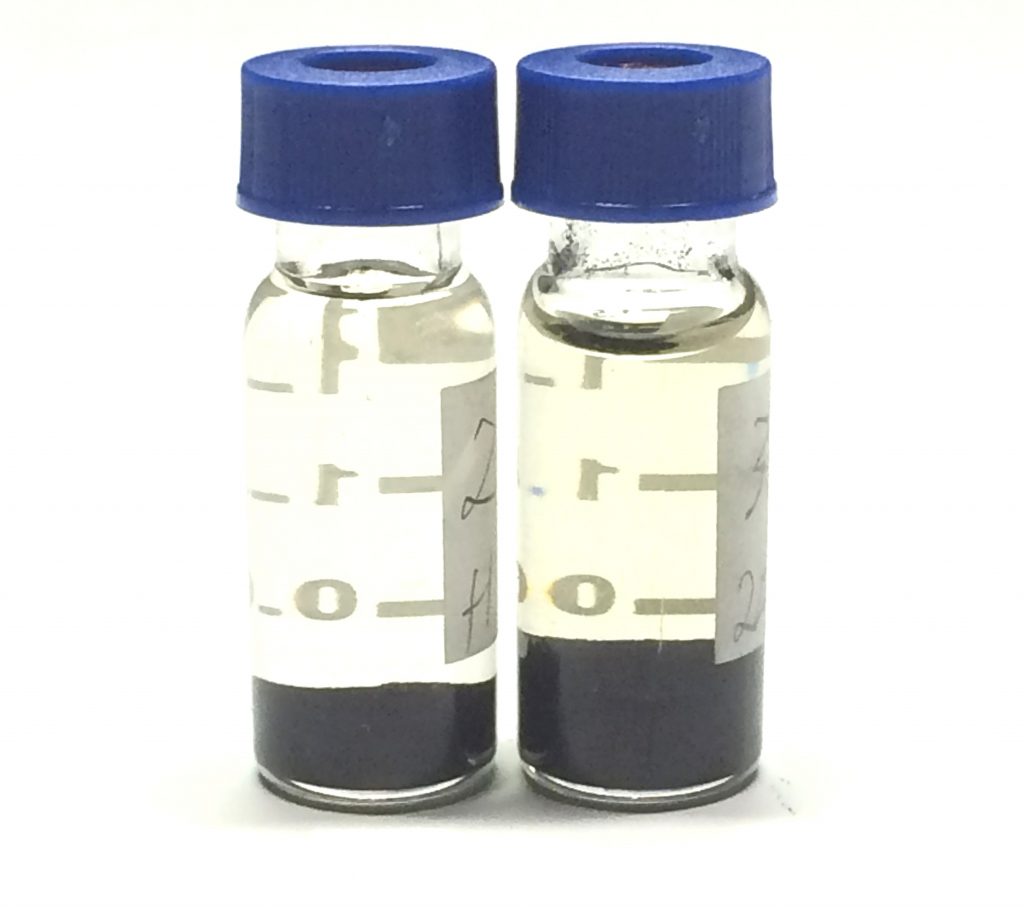 I should really stop calling C60Ra a face cream. It is far more than that. Men see it as a tonic/elixir, women see it as a beauty product but It’s both 🙂

Now people have had a chance to use the cream, I can reveal more about it.
Again due to regulation in some European countries I cannot make medical claims.

So as always I’ll speak of how the elixir has effected me personally. I have been rubbing the cream on my right ankle as I tore my achilles tendon back in September.

I have hard skin on the heels of my feet like many do. To get rid of it- needs a cheese grater! But I don’t bother as it’s not an issue (don’t need beautiful heels lol).

But I was rubbing the elixir on my ankle and noticed all hard crumbly skin has gone from my heels.

I thought maybe it’s the coconut oil? Then I checked my other foot and the skin on both feet has returned to natural healthy soft skin. The thing is I didn’t rub any elixir on that leg at all!

In fact what the LIFE ELIXIR is doing is resetting my body. I’ve been using it for the past 8 weeks.

IT IS RESETTING MY ACHILLES TENDON INJURY TO BETTER THAN BEFORE THE INJURY.

Alchemy has a very long learning curve, sometimes 20-30 years. It’s too dangerous to give to people who would abuse it.

To me, a good definition of Alchemy is spiritual chemistry.

What the alchemist does is work to perfect the physical perfection of a thing. To remove all impurities and leave say the essence of a plant, mineral or metal.

But the alchemist is different in that he also recognizes there is a spiritual and energetic component of the plant, metal or mineral.

Scientists see this in quantum physics when quantum particles hop in and out of existence. One moment the particle is there; the next it isn’t.

Where does it go? Why does it come back? Theses particles are the foundation of matter.

Luckily these quantum particles are usually here because if they weren’t, matter would not be here either.

So the alchemist works to perfect the -parts that are not here- what he would call the spiritual component and the energetic component as well as the physical component.

So the medicine not only works physically but emotionally and spiritually also. The elixir works on all three levels- not just one.

So this LIFE ELIXIR will work to heal ones spiritual body, their emotional body and their physical body.

The alchemist knows that illness is caused at some level first in the spiritual body, then the emotional body and manifests itself physically.

Doctors have noted stress causes various complications for example. What does jealousy cause? Anger lodges in the lower back.

Depressed people are vulnerable to shingles or some other disease. A broken heart is literally that and heart trouble is the result.

The Elixir works on an emotional level. It works on a spiritual level and a physical level.

When an illness is cured by the elixir physically, the emotional and mental causes are also cured preventing the illness reappearing.

So the elixir heals emotional issues going right back to birth- which is incredible. It is resetting emotions. It also brings confidence indirectly, a feeling of well being, peace and balanced emotions.

Spiritually or mentally, the elixir can reset brain power, which means brain power can be rejuvenated.

If I was an older person I feel it would cure alzheimers if I had that, or Parkinson’s disease if I get that.

In fact if I get any neurological dis-ease like parkinsons or altzheimers I believe the elixir will work to heal those, but not MS.

The elixir can be used on children but parents must be careful. Try a patch test maybe once a week for a month or two at the beginning and under the supervision of your doctor.

If there are no contraindications then try a patch test every few days and become familiar with the product. Then one can be confident, but use only 1/4 the amount needed for an adult every second or third day before upping the dose.

This is one difference researchers may notice probably much more than any other.

For me my lower back feels better, my knees, hips, toes feel better/stronger, walking issues sorted out and in fact all my joints feel rejuvenated- back to their original condition not merely healed.

The elixir is more powerful than carbon 60 olive oil. It’s effects are profound which is why I’m using it’s true title: Life Elixir.

This is another massive area for the elixir. I notice my sight getting better and better and if I wore glasses- I’d be throwing them away!

So yes it’s a beauty product but it is far far more than that.

Please don’t ask how I know this but I estimate my body is already between 2 and 6 weeks younger than when I started 8 weeks ago.

This is simply because some parts of my body take longer to regress in age than others.

I have been using it on my face and scalp and my skin feels tighter, younger, spongy, more elastic and tougher.

At the beginning my face felt slightly sun-burned or wind burned but this is because the phenomenal power of the elixir is making my skin a little sensitive.

When this happens I skip using it for a day or two.

I am slowly attempting to teach the basics of alchemy or spiritual chemistry here through these newsletters- at least what you need to succeed.

But here is an easy way to use a plant and gain benefits. The solar plexus chakra is yellow.

The dandelion plant removes self judgement and gives confidence, also unties stress or that ‘knot’ in the middle.

The leaves of the plant are for letting go [of past emotions], healing and opening the chakra.

The petals are for joy. One will feel bursts of joy when using the petals.

Using both leaves and flower is the best and will bring even more benefits than using individually.

The leaves and flower must be as close as possible to the solar plexus chakra (Manipura).

Try using wide sellotape to stick them to your solar pelxus or use a cloth bandage right around your middle and place leaves and flower underneath the bandage.

An hour should be sufficient. If you leave the leaves on for a few hours or several hours you may feel slightly ill.

That’s because a huge clearing is happening and is expressed with slight illness- also called a herxheimer reaction.
Thanks to DF for his go go Rl comments, much appreciated 🙂