Anyone who sent an email to us might not have gotten a reply recently. I’m very sorry but we’re getting many emails and we have so much to do.

We haven’t shipped any Elixir yet to anyone. But you’ll be very glad we didn’t especially K.M.

We’ve developed another technique which boosts the power of the face cream by 2-4 times. So this is what we’ll be sending people this week. Had we shipped 2 weeks ago, it would have been less potent. It’s only in the past few days I made this discovery.

I have been advised not to give a discount on this product but of course I don’t care! I’m giving this to you peeps who bought the 15ml sample jars.

The retail price of this face cream will be much higher than $85 for 30ml, $85 being what we presently ask for C60Ra coconut oil face cream. When IT dept. put it on the website of course.

But I will take the discounted 15ml sample products off the website on Saturday night at twelve o’clock ET.

If I developed an allergy and was not born with it, this C60 would probably help me.

Alchemy is not about making gold! It’s about removing impurities and raising the frequency of something until it is vibrating at a high level or nearing perfection.

What we are doing is reversing the devolution process (the fall) and bringing it back to perfection or; solve et coagula.

I’ve mentioned this before but consider beer at 5% alcohol. It’s not very good for cleaning or sterilizing things. It cannnot be set on fire and is pretty much good for only one thing- drinking lol.

Now say we remove impurities from the beer through distillation. Then we get something like vodka- much more powerful. Few would drink a pint of vodka!

Now we take the vodka and remove more impurities until we have 100% alcohol. What we’ve done is dissolve and coagulate and raised the frequency of the original beer.

We can do this with plants or metals or carbon 60 to create genuine elixirs.

Now the pure alcohol has thousands of uses, as a solvent, sterilizer, fuel a.s.o.

100% alcohol will purify anything for example if food is placed into the alcohol it will be preserved.

So you can see how raising the frequency of a thing can preserve and purify something- like the human body.

The analogy of alcohol is only physical purification. Imagine something being physically pure but also energetically (spiritually) purified.

Negative energy (emotion) in the spiritual body is the root of physical disease.

And because the C60 is a very high frequency, it will raise the frequency of the body, making it younger. This is even at the DNA level as mentioned last email.

So the perfected carbon 60 is like a tiny magician going into the oil purifying it of gross energies, going into the body and cleansing it of negative energies and raising the frequency of the body. Think of it like a bright light removing the darkness.

This is what alchemy, tinctures and elixirs and the Philosophers stone are really about.

This is also the basis for homeopathy where the high frequency of say a crystal or tincture raises the frequency of a product.

So C60 which is a high frequency raises the frequency of the body and of the oil. Even the oil becomes healing- especially for skeletal system and stomach.

The Law of Silence

This is often a difficult law to understand but it forms part of the basis of western hermetic philosophy in the Christian tradition and the philosophers (Alchemy).

Why shouldn’t everyone share? I mean that’s the new thought right, a caring sharing world?

Ok, here’s an analogy about silence. We don’t give all knowledge to children. For example we don’t teach them how to make explosions no matter how fun they are because obviously they might hurt themselves.

So it’s best to be ‘silent’ about certain things until they are mature enough to handle them properly.

The mysteries are veiled from many people because they might literally hurt themselves. OR they may abuse the wisdom.

Or they might share the wisdom thinking they are good people only to find someone else is now using it and abusing it for personal gain/power AGAINST the all, when it was the all who freely gave the knowledge in the first place. This is desecration.

So why would the Supreme Being give incredible, powerful knowledge to people who may use it to make a bomb or some other negative idea.

So silence is very important, especially for me! The gifts I have been given are truly heaven sent. Of course I’ve had to do all the work lol. But if I were to reveal certain things, it would be a catastrophe for me personally- even if my intentions were noble and good.

That’s because my noble intentions of sharing would be well received well by say, a dishonorable country who steals others ideas.

They would of course be extremely grateful for my generosity and proceed to use the knowledge in their goal of Global domination, and try to put me out of business 🙂

It is not wise to reveal anything even to a close friend. So for that reason I am not and cannot be open to questions about our techniques, methods and ways.

And that is one of the reasons we are ‘blessed’. You too can be blessed in the same way if you are honorable, noble and will keep quite about sacred knowledge imparted to you.

There are no such things as inventions. I mean if someone invented something the Supreme Being hadn’t already thought of, He wouldn’t be a very good Supreme Being after all.

So Divine Providence has thought of every previous invention and all coming inventions. What we can do is make discoveries.

Or more correctly, when we are mature enough that we wont hurt ourselves (like any responsible parent) and when we are noble, honorable and silent, the Supreme Being is just waiting for that day when He can share his ideas with us.

Which group of people on planet Earth have discovered more inventions than any other and why? Sikhs, Hindus, Christians, Islam, Buddhism, black, white, yellow, red, green, other? One group in particular has been blessed over and over and over again with inventions.

Is it the group with the most integrity? Entire countries can be corrupted because the people are corrupt. They are sharp, thinking they can outsmart others with tricks and slight of hand.

Of course you get back what you put out. I define the characteristic of ‘sharpness’ as one who maybe sells steel to you but unbeknownst to you, it is weak steel- from a trickster.

So the Universe will be a trickster to sharp people who think they are clever and smarter than everyone else. What they don’t realize is they’re not as sharp as the Universe because it knows their tricks before they do.

So sharp people and sharp countries- they get zero, zip, nada, nothing. Except they get the bare minimum until they learn to have a conscience and good morals.

It’s simply irresponsible giving them anything because most will abuse the gift for money or power or both and hurt people in the process.

In alchemical circles this would be called ‘staying within authority’ and is the true meaning of the phrase- bind yourself and you shall be free.

We have discovered a new product! And it is quite shocking. By combining techniques we can now raise the power/potency of carbon 60 to 90 (ninety) times that of our regular C60.

This means 1kg of RL C60 may be enough for 900,000 bottles of olive oil. One issue is that it is dangerous to make- very dangerous because we’re now tinkering with the nuts and bolts of the Universe.

This is not about money but without compromising the law of silence, it may be possible for a small team to supply enough for millions of people.

We’re not selling the new combined C60 for the time being until I have a better understanding of it. For example I don’t feel a person with mental health issues should use it.

But I have found a safe way to make it. Use one technique on one batch of C60. Then use another method on a second batch of C60 and then mix the two batches together.

This is not as powerful as combining techniques on the same batch, but it will still be 70 times more potent!

Research is showing this may be like giving someone a blood transfusion. Literally new life is planted within the body.

C60Ra is uplifting, gets people talking but not the strength of the new method. C60 Ra is coming in as 8 times more potent whereas the new technique would be about 9 or 10 times more potent.

The new method makes C60 which is grounded, has good vibration. The combination of the two methods gives 90 and 70 times potency.

This is what I will make the face cream out of for the 15ml sample jars, except I’ll use only a tenth what I would normally use.

When I get some feedback on the product, I will explain more about this face and body cream. Of course none of these elixirs are for pregnant women.

The cream cannot be applied liberally. It must be applied sparingly but often. It takes time to build up and must be built up in layers. Extra cream applied to the face is simply a waste.

It should be applied in the morning and especially at night as a night cream. Not sure yet how it may affect hair growth for men.

It is positive for getting to sleep and may pull people into deep sleep more quickly. Helps one switch off quickly- very grounding. Good for couples.

But can you prove this Marten? Use it! is my answer, we’ll soon see right? 🙂

For all you clever guys and guyettes out there, can you tell me what is happening in the picture and what it means?

The liquid is water. The block is an N52 magnet. There is no metal in the jar. There are no fullerenes in the jar 🙂 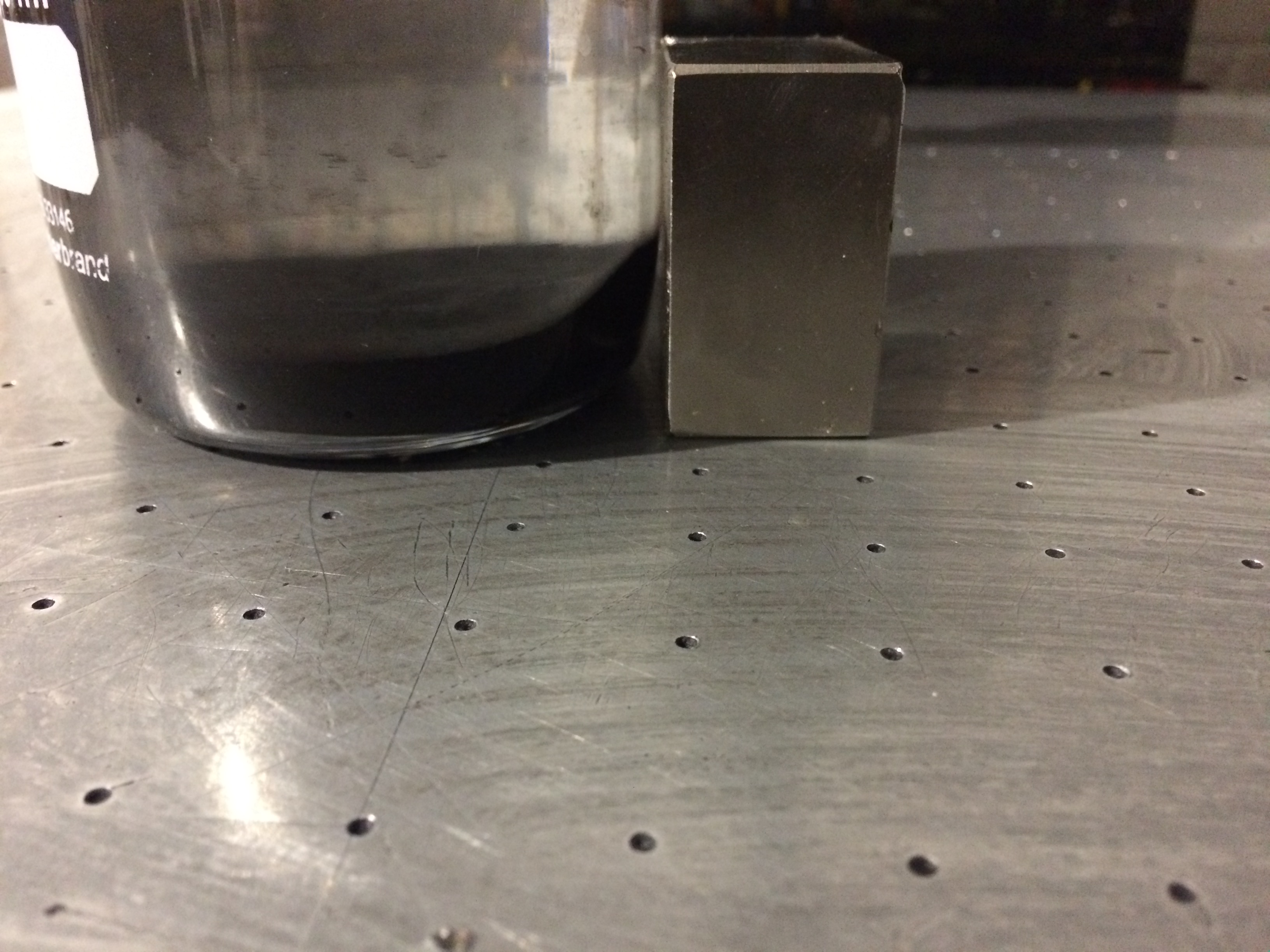 Ok, back to work for me lol!